skip to main | skip to sidebar

The Eternal Rose by Gail Dayton 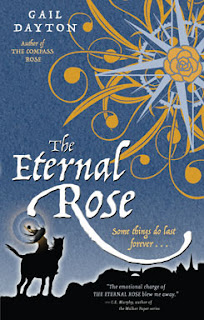 Last week was, for the most part, not a good week. However, dee and I were pumped to get one piece of most excellent news, and that is Dee & dee will be quoted in Kristan Higgins next book, CATCH OF THE DAY. If you'll remember I picked Higgins' debut novel FOOLS RUSH IN as my Best Book of 2006. I have lost count of how many copies of FRI I have actually purchased and sent to people, and how many people I've recommended the book to that I saw buy it. It's that good. So, to be quoted in the next book from such a talented author is just...well, it's just too darn cool. And finally, before I get started, Sewicked, I still have not heard from you with your address for the contest win. Please e-mail me your addy so that I may get that to Michele. If I don't hear from you by weeks end I'll have to pick a new name. And now, without further ado...

Six years ago, the demons behind the rebellion in Adara were defeated, and Kallista Varyl was named the new Renine. Now, finally, word has come that her abducted family members might be found in the homeland her mate Obed abandoned. She packs up the family for a state visit, but disaster strikes: One of the godmarked is murdered, leaving Kallista devastated. But there are children to rescue, slaves to free, and the wicked working of demons to set aright. A ninth godmarked must be found to make the magic whole - but Kallista will need more than magic to heal her this time.

This is the final book of The Compass Rose Trilogy, so when I sat down to read it, I was nervous that I would be lost (as I had not read the other two books). Let's just say I was pleasantly surprised that that was not the case. In fact, Dayton's writing is so solid that I fell immediately into the story and lost myself in the world.

It was another pleasant surprise to find that the fact I read the BCC and the publishers literature that accompanied the book did not take away from the story in any fashion. The BCC is spot on and not at all misleading and for the first time in a long time I promptly forgot it while I read.

Kallista Varyl is the Reinin, Ruler of all Adara and she is also Chosen by the One, Godstruck. With her nine godmarked, all members of her ilian, she rules the country by day and searches for demons at night. Unfortunately, since peace has been the order of the day for so long, Kallista has let her magical muscles relax, so that when trouble comes calling, Kallista is not expecting it.

When a demon escaped them last, he rode out of town in the body of one of their ilian, and she was pregnant with child. Now, it appears, the demon is ready to toy with them again. Just after death spells are found in the palace, a messenger arrives from Obed's homeland, and brings a picture of a boy who could only be the child of their lost family member.

Kallista, the rest of her ilian, all of their children, and several guards set off to make the long and dangerous trip to Daryath. A place where ilian are unacceptable, and the offense of belonging to such a family is an offense that could be punishable by death. Once there, they find the town riddled with demon stink, and know that first and foremost they want to rescue their missing family, but then they will have to do battle with the demons.

But, the demons aren't quite that easy to find, and when negotiations for the child and mother end in murder, Kallista and her ilian find themselves one ilian and godmarked short, and with his loss comes the lessening of their magic and without a ninth godmarked they stand no chance against the very old, very evil demon that is polluting the city with hate.

The Eternal Rose is a fast-paced page turner, and I found it almost impossible to turn away from Kallista and the rest, as they try to free their lost son who has been serving as a slave, in a court that bring an entire new meaning to the term "custody battle", fight demons, try to free slaves, protect their children, and try to deal with the loss of a very beloved ilian.

There was only one thing that made me stop and say "hmmmm" in the entire book, and that had to do with a very, awwww, steamy part that left me scratching my head at the impossibility of the act. Other than that, Kallista and her family touched me deep with the amount of love they held for one another. I felt as if I knew these people, and I, for one, very much enjoyed my time spent in their world.

If you are an inspiring Fantasy writer, The Eternal Rose, is a must read. Dayton is a master at world building and she does it without ever breaking pace. She managed create a world so very different from our own, but also make the people in it so real. Or if you are just a reader looking for a great book to take you away for a while, this book is for you. I'm going to have to order the first two books in the trilogy now, as I did not want to leave Kallista and the Adarans behind and I'm willing to bet you'll find yourself doing the same!

Take Care
Dished by Chari-Dee at 9:25 AM

One of the moms in my homeschooling group was talking about this.
It looks pretty good.

Thanks for the lovely review, Dees. :)


There was only one thing that made me stop and say "hmmmm" in the entire book, and that had to do with a very, awwww, steamy part that left me scratching my head at the impossibility of the act.

Sounds good. I think I'll start with book 1 in the series. After reading your review I'll bet I read all three. Congrats on being quoted in Higgins's next book. Awesome!

If you'd like to submit your book for review, feel free to send it along to:

Be sure to check out the Submission guidelines found here.

Books I plan on reading -